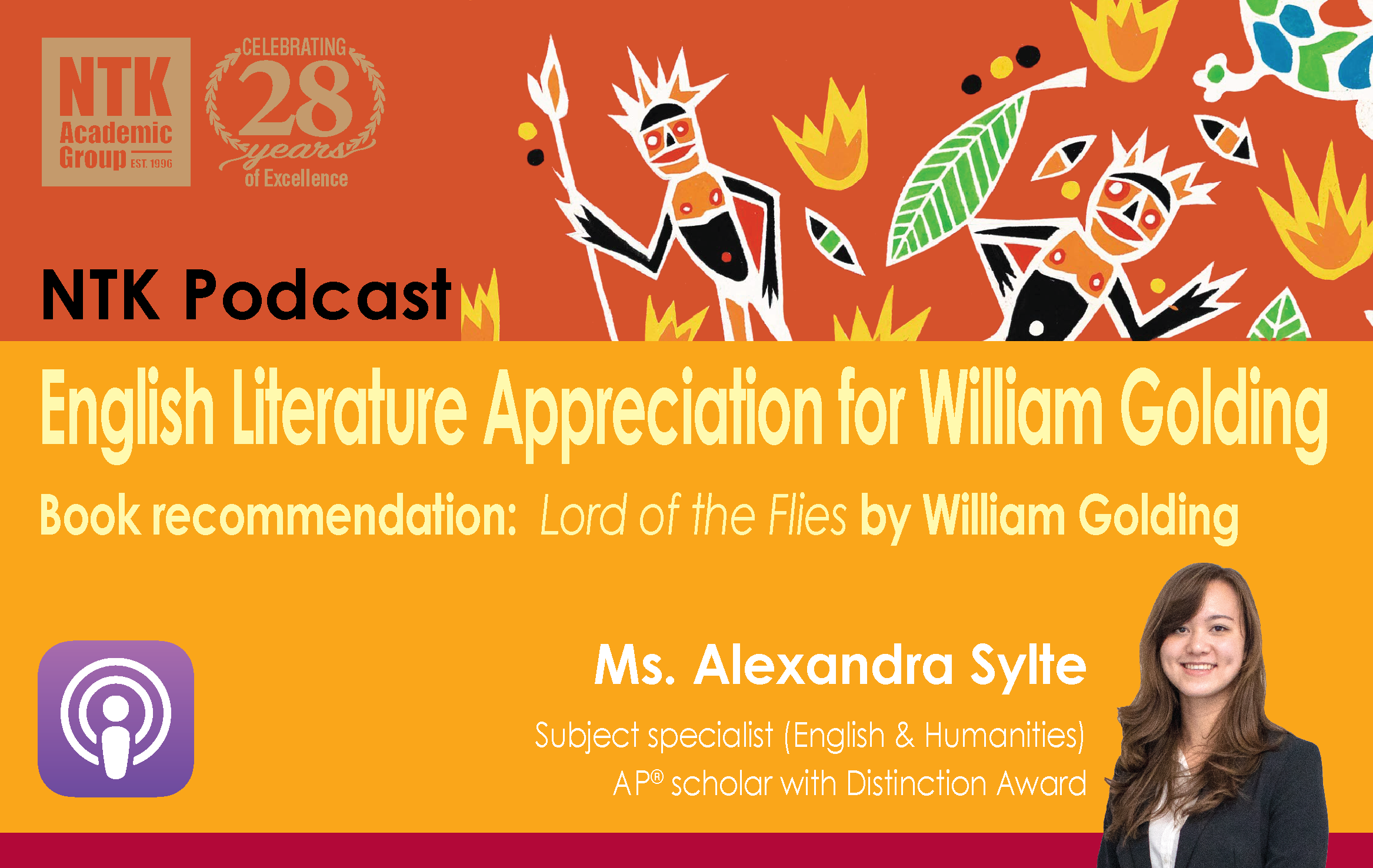 Alexandra graduated with distinction from McGill University, having obtained a bachelor’s degree with double majors in History and Economics and a minor in East Asian Studies. Born in the United States and later moved with her family to China, Alexandra holds English as her native language, Mandarin at moderate-level, and Japanese at beginner’s level. She has received a diversified education and graduated as an AP Scholar with Distinction. Alexandra is an ideal teacher for IBMYP, IGCSE, SSAT®, SAT®, ACT®, AP® and Core English.

Imagine you are trapped on a deserted island, with no evidence of civilisation in sight. Do you think the experience would change you?

This question is one examined by Nobel Prize-winning British author William Golding in his 1954 novel, Lord of the Flies. This classic is a teacher-favourite when it comes to selecting a novel for IGCSE coursework. In this episode, we will be discussing the historical context, synopsis and general theme of this famous novel about human nature.

It was World War II and its implications that impacted the minds of many still reeling from the First World War. The First World War was meant to be the “war to end all wars,” and its own aftermath was devastating. However, a mere twenty-two years later marked the beginning of yet another globally destructive world war. People such as William Golding were left to question whether it was our human nature to be warlike, savage, and hungry for power. While the war occurring outside of the novel’s events is not meant to be WWII, there are brief references to relevant terminology such as the atom bomb and the communist “Reds.”

The main story, however, takes place on a deserted jungle island. A plane transporting a group of British schoolboys has been shot down, and the boys find themselves alone without any grown-ups or way to return to civilisation.

Two boys, Ralph and Piggy, find a conch shell and blow into it like a horn in order to assemble all the others on the island. Ralph and another boy, Jack, run against each other to be the leader of the entire group. Ralph wins, but names Jack as the leader of the group’s hunters. The boys begin to set up rules for themselves, including the rule that during their assemblies, whoever wishes to speak before the group needs to hold the conch. During an assembly, one of the younger boys claims to have seen a “beastie” on the mountain, but this claim is dismissed by Ralph as only an imagined nightmare. Tensions begin to rise as Ralph struggles to maintain order, Jack becomes more merciless and obsessed with hunting, and the rivalry between them eventually erupts into their own war complete with suffering, savagery, and death on the island.

Lord of the Flies is a novel centred around the theme of human nature, and the question of whether or not our “civilised” self is in fact a thin, fragile veneer over something much darker. Golding seems to suggest so, as his novel insinuates that mankind at its core is a savage and selfish thing, aiming for dominance over others. The marooned group of boys on the island acts as a microcosm of society as a whole were the constraints of civilization to be removed. Without grownups or rules to enforce consequences for their actions, many of the boys are quickly drawn to their baser instincts of brutality and greed. What is truly harrowing is that the novel’s protagonists are, in the end, only children. Considering what these children are shown to be capable of, what would happen if the same opportunity were presented to the adults in the outside world? As Simon, a shy and pivotal character in the novel, puts it: “Maybe there is a beast.” […] “What I mean is, maybe it’s only us.”

William Golding’s Lord of the Flies is commonly seen on the reading lists for IGCSE courses. We recommend that you add this book to your own list if you are about to begin IGCSE, or even if you are simply looking for interesting reads. Thank you for listening!

Episode 1: Learning the importance of slang

We use cookies on our website to give you the most relevant experience by remembering your preferences and repeat visits. By clicking “Accept All”, you consent to the use of ALL the cookies. However, you may visit "Cookie Settings" to provide a controlled consent.
Cookie SettingsAccept All
Manage consent

This website uses cookies to improve your experience while you navigate through the website. Out of these, the cookies that are categorized as necessary are stored on your browser as they are essential for the working of basic functionalities of the website. We also use third-party cookies that help us analyze and understand how you use this website. These cookies will be stored in your browser only with your consent. You also have the option to opt-out of these cookies. But opting out of some of these cookies may affect your browsing experience.
Necessary Always Enabled
Necessary cookies are absolutely essential for the website to function properly. These cookies ensure basic functionalities and security features of the website, anonymously.
Functional
Functional cookies help to perform certain functionalities like sharing the content of the website on social media platforms, collect feedbacks, and other third-party features.
Performance
Performance cookies are used to understand and analyze the key performance indexes of the website which helps in delivering a better user experience for the visitors.
Analytics
Analytical cookies are used to understand how visitors interact with the website. These cookies help provide information on metrics the number of visitors, bounce rate, traffic source, etc.
Advertisement
Advertisement cookies are used to provide visitors with relevant ads and marketing campaigns. These cookies track visitors across websites and collect information to provide customized ads.
Others
Other uncategorized cookies are those that are being analyzed and have not been classified into a category as yet.
SAVE & ACCEPT
Loading Comments...
%d bloggers like this: