Episode 1: Learning the importance of slang 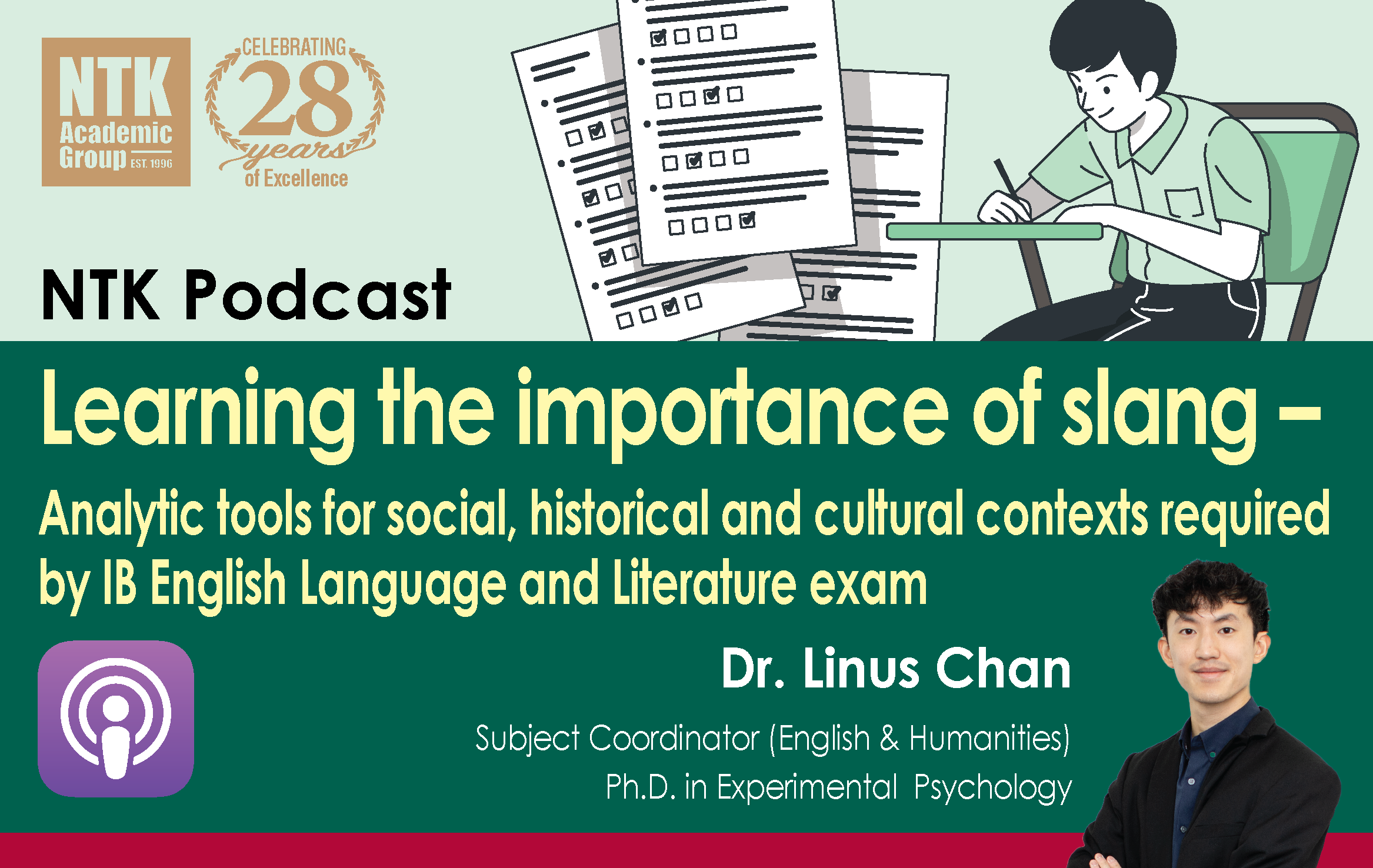 Linus obtained both his M.A. and Ph.D. in Experimental Psychology at the University of Montana. Backed up by this academic background and extensive experience, Linus knows a wide range of international curricula. He makes effort to engage students in both practical textbook knowledge and inspiring mental exercises. Linus is an ideal teacher for English in all types of international exams.

Learning the influence of slang in the English language – Writing an analytical essay considering the social, historical and cultural contexts required by for IB English Language and Literature Exam

Languages and their variations have a role in both unifying and diversifying human societies. That’s because language usually conveys more than the literal meaning. IBDP English Language Exam candidates are expected to understand the use of language within its appropriate social, historical and cultural contexts.

This episode spotlights International Baccalaureate English Language within its framework. Even though NTK’s IBDP English students can speak confidently and proficiently in English, the IB Exam focuses on enhancing students’ abilities to comprehend and grasp the meaning of words specific to a generation, academic field, or culture.

Let’s begin with the uniqueness of slang language for a particular generation. The current generation of teenagers, known as iGen for Internet Generation, routinely adopt slang they learn online. Some popular phrases are “Sus”, “On Blast”, “Spill the Tea”, “Throwing Shade” and “Big O of”. “Sus” (short for suspicious) gained popularity due to the online game “Among Us” which gained traction during the pandemic years. “Spill The Tea” and “Throwing Shade” both came from theater culture and are now used widely on the Internet. They mean gossip and insulting someone, respectively. The online world popularized all these slangs.

Students who are preparing for the IBDP English Language and Literature exam must also know the new terms of the scholarly area, called jargon. Some literary jargon are personification, allusion, symbolism, enjambment, and anaphora. Business and Economics jargon includes terms like stakeholder, negative externality, and invisible hand. Both the speaker and audience must be familiar with these terms in order for them to effectively communicate. This is essential for students taking the IBDP English Exam, as they must be able to identify these terms in unseen texts.

Language is also unique to certain cultures. In the 2016 IB Language and Literature Exam, students had to analyze an app sold on the Apple iTunes store with conventions such as reviews, endorsements, and sensory imagery; IB students are expected to analyze jargon related to information technology.

Similarly, in the IBDP Exam of 2017, students had to analyze an online website about emojis. Students are expected to know about the rise and function of emojis in communication. Likewise, in May 2018, IBDP Exam required students to study a webpage that promoted vacationing in Tasmania as an escape from busy city life. IB students are expected to know words related to hospitality and leisure. And in November 2021, students analyzed a blog where the author supported Indian women who chose to be stay-at-home wives. IB students therefore must have knowledge of traditional and modern gender norms and the roles of women in today’s society.

University students learn words in context as they specialize in their studies. And we must understand words in context to communicate with people of different professions. Take the acronym “EDM” for instance. EDM stands for Electronic Dance Music. People who work in music know this. But for those working in marketing, EDM stands for Electronic Direct Mail. Let us consider another word, what does “Contempt” mean? For dancers, it’s a style, while for lawyers, it’s a form of disobedience in court. What does the word “Bias” mean? Scientists may consider experimental bias, while K-pop fans may prefer certain members of a group. For example, many K-pop fans refer to Jungkook as their bias from the legendary boyband BTS, who recently performed at the World Cup opening ceremony.

Language is essential to any culture. It helps people connect with each other, build relationships, and create a sense of unity. Knowing a language without understanding how it is used in context is not enough. Intercultural communication is how social reality is shaped, sustained, fixed and changed.

This crucial element of language is why NTK tutors devote a considerable amount of time to unpack how language is used in its appropriate context, and help students prepare for the IBDP Exam.

It is the end of the audio content, and thank you for listening. See you in the next episode.

We use cookies on our website to give you the most relevant experience by remembering your preferences and repeat visits. By clicking “Accept All”, you consent to the use of ALL the cookies. However, you may visit "Cookie Settings" to provide a controlled consent.
Cookie SettingsAccept All
Manage consent

This website uses cookies to improve your experience while you navigate through the website. Out of these, the cookies that are categorized as necessary are stored on your browser as they are essential for the working of basic functionalities of the website. We also use third-party cookies that help us analyze and understand how you use this website. These cookies will be stored in your browser only with your consent. You also have the option to opt-out of these cookies. But opting out of some of these cookies may affect your browsing experience.
Necessary Always Enabled
Necessary cookies are absolutely essential for the website to function properly. These cookies ensure basic functionalities and security features of the website, anonymously.
Functional
Functional cookies help to perform certain functionalities like sharing the content of the website on social media platforms, collect feedbacks, and other third-party features.
Performance
Performance cookies are used to understand and analyze the key performance indexes of the website which helps in delivering a better user experience for the visitors.
Analytics
Analytical cookies are used to understand how visitors interact with the website. These cookies help provide information on metrics the number of visitors, bounce rate, traffic source, etc.
Advertisement
Advertisement cookies are used to provide visitors with relevant ads and marketing campaigns. These cookies track visitors across websites and collect information to provide customized ads.
Others
Other uncategorized cookies are those that are being analyzed and have not been classified into a category as yet.
SAVE & ACCEPT
%d bloggers like this: